ANDY CHRISTOPHER MILLER has worked as a professor of educational psychology for two British universities and published ten books in his field, including ‘Child and Adolescent Therapy (1992)’ and ‘Teachers, Parents and Classroom Behaviour: A Psychosocial Approach (2003)’. He has also published book chapters, magazine and journal articles on topics as diverse as relationships, travel and mountaineering. His memoir of family, truth and secrets and what it was like to grow up in Britain in the years following the Second World War has been published as The Naples of England (2015)

The Naples Of England

The War is over and a generation returns home to build peace, determined to create a new society, protected from cradle to grave.

On the beautiful Dorset coast, baby boomer, Andy Miller, grows up surrounded by the security and nurture of the 1950s welfare state that will propel him from council estate to university. In a series of vignettes and stories, some humorous and some poignant, the author describes growing up in this vanished post-War world.

What happens then when one day, decades later, he discovers that everything he thought was true is not?

This is a memoir of family, truth and secrets and what it was like to grow up in Britain in the years following the Second World War.

“A moving, funny and compelling account of growing up in small-town Britain. The sheer warmth, honesty and fine detail of Miller’s writing brings this fascinating memoir vividly to life”
Megan Taylor, Author, ‘The Lives Of Ghosts’ 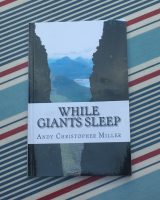 An anthology drawing together previously published and new prose and poetry from across the writer’s 40 year career, displaying a twin focus on mountaineering, rock climbing and outdoor adventure and on relationships across the adult life span.”This collection pulses with life and energy …” Aly Stoneman, LeftLion, 2013. Andy Miller’s prose and poetry has won a range of awards and commendations. The judge for the 2011 international Yeovil Literary Prize, Daisy Goodwin, described his prize-winning poem ‘Attempting to Interfere’ as having “… a distinctive voice… (being) mysterious but repaying a close reading”. His long out-of-print small book ‘Hanging in the Balance’ also attracted critical acclaim – “this brave, fragile pamphlet… is the best writing I’ve read in ages” (Terry Gifford, High) and “… it may already be a collector’s item. For there is a breath of humanity in this book” (Ed Drummond, Mountain). ‘Hanging in the Balance’ is reprinted here in full.