The next Society meeting will be on Wednesday 8th May at 7.15pm in the lounge of St Mary’s Church, Church Street, Eastwood, NG16 3BS. The lounge is at the back of the church and the car park can be accessed by the driveway just before the church as you are approaching from the town centre.

Our speaker Nick Ceramella will be coming from Rome to give a talk which is entitled:

“Compelling attraction of Italy: Lorenzo’s lifelong pilgrimage up and down the country” ( Part Two: 1919-1922) 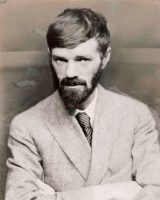 David Herbert Lawrence, the world famous, screwy genius, remains fresh as the odour of elderflowers to dip into, but is little read in England except by literature students – though in 1960 we passed around copies under the desks of the newly uncensored “Lady Chatterley’s Lover”, open at the naughty John Thomas bits, during Applied Mathematics lessons.

Supposedly known as “that mucky man” in Eastwood, he seems to have aroused hatred wherever he went, presumably because his plots and characters were immediately recognisable on the surface from real life. His penetrating, sensitive and imaginative interior portraits then only make things worse – whether believed to be true or false to those depicted. The people of Nottinghamshire and Derbyshire have exacted their revenge. Haggs Farm, potentially the greatest shrine, remains boarded up and private. The Nottingham D H Lawrence Centenary Book Fair, which Scarthin Books attended, along with, for instance, a company from Italy, attracted about thirty visitors a day.

In 1917, managing to evade war service and with his German wife, he lived for a year just up the valley from us in the beautifully situated Mountain Cottage,built on the site of a lead-mine near Middleton by Wirksworth, overlooking the wild Via Gellia, which seemed to him like the Navel of England. Here he worked on Studies in Classic American Literature, penned a couple of short stories – one of which, Wintry Peacock, is so apparently documentary that it reveals to the world that an Ible farmer left behind an illegitimate child during his war service in Belgium (well, at any rate I can now reveal this Lawrencian accusation to the World Wide Web!) and posted wonderfully lyrical letters to friends. Perhaps fifteen years ago, I enthused about all this and read out the letters to the Tawney House Luncheon Club. Flushed, I sat down to warm applause. The chairman’s encouraging request brought an old lady to her feet. “I was a girl when he was there. He used to come walking, bold as brass, down through Middleton to the Lord Nelson, but we had nothing to do with him. None of us would so much as pass the time of day with him. I had two brothers in the war and there he was HIDING in that cottage while our men were DYING in France. We’d no time for the likes of him, no time at all!”

Lawrence buffs will probably know with greater accuracy than I of that legendary purchase, by another dealer, of a cheap box of books at a Nottingham auction, all inscribed by DHL to that famous girlfriend… “Oh, the letters, we put those in the bin…”, the pursuit, fruitless, to the council depot, the sale of books to an American university. We have ourselves bought books of his sister Ada, rescued from a bonfire. Recently, we were abruptly awoken when about to condemn a boot full of battered school text books and Sunday school prizes by the casual aside, “Oh, that one was Lawrence’s, wasn’t it”. Some years ago a patrician lady ushered into our shop an old woman who I remember as being of immense girth, squat, stick supported, out of breath (I apologise if this memory is an implant). Imperiously her minder demanded a chair – quickly (before it’s too late!). Occupied, the chair became a throne! “THIS (or did she say ‘THAT’) is MRS WILLIAM HOPKIN!!” Given no other clues, even ‘deep thought’ would reply “errm…”.

Oh, and by the way, Sir Clifford lived at Alderwasley Hall, now, appropriately, a special school.

During 1998 we have purchased books from the “son of Lady Chatterley’s Lover”, a gentleman whose father was a gamekeeper on the Eastwood Hall Estate [quoted from memory] and who used to meet and converse with DHL – The elder brother of our client may know more, if tracked down.

P.S. DHL’s nephew Bert (named after him) strenuously denies the existence of the above- mentioned “bonfire”!

And Steve Hopkins writes: I think you’re a little hard on DHL – he ‘avoided’ the war because he was seriously ill with ‘consumption’. In fact he was given a total exemption from military service after examination at Bodmin in June 1915. All this is detailed on p332 of vol 2 of the Cambridge biography.

For some wonderful detail on Eastwood, the Haggs and a portrait in words of Jessie Chambers (“Miriam” in Sons and Lovers) see (or at least seek via) Alan Rowley’s History pages.

Why not join that splendid forlorn hope The Haggs Farm Preservation Society – we can forward your address.

Terry Needham has kindly supplied us with the following article, first published in the Newsletter of the Lawrence Society a few years ago.

IT WAS ALL VERY DIFFERENT THEN

Members of the D. H. Lawrence Society will most certainly be totally unaware of the existence in the 1950s of a locally based forerunner to their organisation. This august body was the Lawrence Circle of Ilkeston, Derbyshire whose total membership consisted of three (occasionally four) schoolboys from Ilkeston Grammar School.

Meetings between these would-be “bookish” boys took place on a very “ad hoc” basis in each others’ houses and usually consisted of poetry readings, discussions of various literary works and general chats about such matters. I remember well writing to George Bernard Shaw, and getting a reply card from his secretary Blanche Patch, and to J. B. Priestley who kindly replied but asked that I spell his name correctly in future! We even had a rubber stamp made bearing the name The Lawrence Circle but never quite knew what to use it on. This arrangement existed for some three or four years until the real world interrupted and we went our separate ways for ever, one to read history at Cambridge, one to read Law at Nottingham and myself to join the ‘other ranks’ in the Royal Air Force.

What had started this obsession with DHL which still prevails with me till this day some 38 years later? Well, in my case it was the simple act of picking up a copy of The Rainbow in Ilkeston Public Library, wondering who exactly this vaguely familiar Lawrence chap was and then opening the book to discover in the first paragraph the reference to”… the church-tower at Ilkeston in the empty sky.” Overcome by the revelation that here was a ‘serious’ author writing about where I lived and what I knew, I read on and on and on…

Thus one by one the novels were read and appreciated, followed by a determination to discover all I possibly could about Lawrence. This lead me to a new book by Harry T. Moore, ” The Life and Work of D. H. Lawrence” published in 1951 and described at the time as the first definitive biography – a fascinating read which taught me a lot but which contained various, mainly topographical, errors. With the brashness of youth we wrote to Mr Moore c/o the publishers and some months later received a reply, gracious to a fault and thanking us for our comments. This was the first of a number of letters which went back and forth over the Atlantic during the next year or two and we did indeed help Harry T. Moore with some basic research in Ilkeston and Cossall.

Imagine my delight when he gave us an acknowledgement in the updated version of his biography “The Intelligent Heart” in 1955 – our claim to fame. Unfortunately I have no copies of what we wrote to him but do have two airmail letters he sent to me, full of interesting observations. I’m sure that Harry T. Moore, the doyen of American biographers for many years, never realised that he was writing to a trio of 17- or 18-year old youths.

It really was a different world in the 1950s and reading about Lawrence now one realises how little was known then and how much we have learnt from the assiduous scholarship and writings available to us during the last thirty or more years. The industry grows, the books proliferate – good bad and indifferent, but now we have the wonderful new biography by John Worthen “The Early Years”, this being Volume 1 of the new Cambridge three volume biography. This is surely the definitive work and offers us all we need to know – what a triumph of research and writing!

What has prompted these ramblings? One of my spare time interests was until recently the Editorship of the Newstead Abbey Byron Society Newsletter and I attended a Social Evening when my friend Pamela Lewis together with Joan McCluskey and Rosemary Howard came along and spoke on the “Nottingham Connection” of Lawrence and Byron. Talking afterwards to Rosemary and to my friend “the fount of all knowledge” Lucy Edwards, I revealed this story and was prevailed upon to commit it to paper.

I think we may have lost a lot of our values and standards in recent years but we have certainly gained in some fields. The world of literary scholarship and debate is now so organised and widespread that the reader is able to learn something new every day. Nothing however can ever replace a young man’s sense of discovery, the feeling of satisfaction in writing to this American professor, in aquiring new knowledge – and as I read my first editions of Women in Love, Sons and Lovers, The White Peacock and all, I still feel the same way now about the young man who left Eastwood and “the country of my heart” to travel, to write these great books and to conquer the world with his genius.

Here is our link to the D H Lawrence links page.