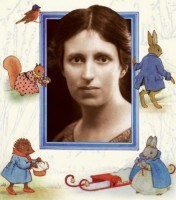 Alison Uttley is still known as a name by many, and read by a devoted band of followers, mainly ladies, but for how much longer? Superficially her Little Grey Rabbit books resemble Beatrix Potter’s Peter Rabbit series and this probably explains her success, which she badly needed when she started to write in middle age.

I find Little Grey Rabbit rather too wordy and too concerned with the loving details of housework, home-making and traditional country ways to be readable to young children. Her viewpoint is of extreme feminine sensitivity to both the magical imaginative meaning and the canny practical wrinkles of everyday life as she experienced it as Alice Taylor, a hill-farmer’s daughter, the Country Child of her best autobiographical novel. Building on a vivid dream of being A Traveller in Time, her historical novel of that title is her masterpiece. No other ghost story I know is so poignant, actually haunting and convincing. She really becomes the both modern and Elizabethan girl Penelope Taverner who tells her own true story. After the war Mrs Uttley embarked on a long series of reminiscences of country life which are a mine of folklore, local history and old Derbyshire ways, though she does repeat herself rather. Most were embellished by Charles Tunnicliffe, whose characteristic illustrations, though based on the Derwent Valley as he saw it in the 1950s complement and enhance the descriptions of life in the 1890s. Despite quarries, traffic and new housin We have heard the opinion expressed that the illustrator Charles Tunnicliffe never visited the area, working instead from photographs.g, the “Alison Uttley Country”, some ten square miles of the Derwent Valley from Crich and Ambergate to Matlock Bath and Cromford remains one of the most scenically romantic in England – outside the National Park though it is!

Many of her papers and letters are in the University Library of Manchester Collection.

For her centenary in 1984, we planted an oak tree near Castle Top to replace one she used to swing on until escaping the fall of the heavy branch that supported the swing – the event is described with typical intense recall in A Country Child.

On Thursday 11th. June 2009, the locality hosted not one but TWO launches by Editor Dennis Judd ofThe Private Diaries of Alison Uttley, 320 page hardback ISBN 9781844680405, the first at Manor Farm, Dethick, with talk by Dennis and readings by Joyce Varty over a buffet lunch and the second here at the bookshop in the evening, over more snacks. The diaries add to the impression given by Dennis’s earlier biography of a “driven” artist whose insecurity over her own achievement and reputation led to a bitter attitude to those whom she saw as rivals for her “niche”. (I interpret from introspection. DJM) I can’t help passing on the link for a recollection of an Alison Uttley Signing Session by a sometime downtrodden publisher’s hack.