Around the year 1993 it became fashionable in Paris to hold semi-formal philosophical discussions in cafés and so the term Cafe Philosophique was born. At this time, Evan Rutherford, the Mad Potter of Wirksworth orProfessor of Green Hill was giving a series of basic philosophy lessons to Scarthin Books’ Mitchell family and friends in their home. When we opened the Scarthin Books Café, we decided to follow the Parisian lead and to go public in the Café. Thus was born our own Scarthin Books Café Philosophique . 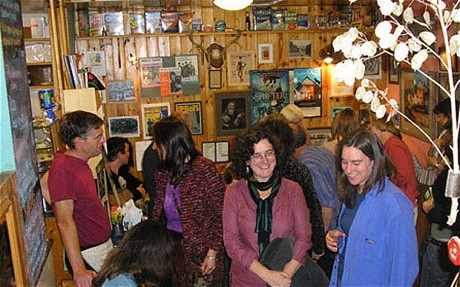 After a number of further primer-in-philosophy meetings, Evan ran out of steam (only temporariily!) and we invited other members of the growing group to lead discussions. So it has continued, at irregular intervals, for over a decade.We normally meet in the bookshop café at eight on a Saturday Night. The talk lasts about an hour, followed by something to eat and a discussion phase that goes on to ten or a bit later -and afterwards in the pub for some. Most years Evan gives a Wirksworth Festival Special in a larger venue over the hill in Wirksworth, and we occasionally colaborate with other organisations to put on specials in the Imperial Rooms, Matlock or in Cromford Community Centre if we expect the bookshop café to be too small.

We charge (2009) £4 to cover food and some advertising costs. The meetings are advertised by means of posters and the website in addition to a mailing list. We have never sought outside professional or paid speakers; it has been abundantly proved that many members of our own shifting group have at least one lecture to a very high standard inside them – perhaps based on revived university studies, on a dissertation or, more often, on an intense personal interest. Other speakers have been found through personal networks and recommendations. Over the years attendance has waxed and waned – from as few as six to as many as thirty six at Scarthin evenings; twelve to twenty is more normal and more comfortable.

I can vouch from experience for the effect that fear of forthcoming Philosophique has on sharpening up your research, reading and writing over a period of, usually, a couple of months or more. The aim is not merely to be able to give a stimulating and well-informed talk, but to be able to field the stimulating and well-informed questions afterwards!

I must get around to listing all the topics we have investigated – worthy of Melvyn Bragg and Radio 4.

The illustrations were taken during a break from talk, if not thought, for refreshments during David Furness’s November 2009 talk on Marx ; The Man and his Thought. For a brief review of the meeting, see our News Page and for the text Dave spoke to, the main Cafe Phil webpages.

We have recently been contacted by the Raymond Williams Foundation, dedicated, among other things, to the encouragment of Education outside the walls of academia. Having drunk thirstily at the fountain of theWorkers’ Educational Association (WEA) myself, I am delighted to be able to put in these links to their siteand the events they promote.

For information on Forthcoming Café Philosophique meetings, and the text of some past presentations, click on Les Hurst (Brain of Ilkeston)’s Cafe Philosophique site, which he keeps up to date in between giving talks himself. Les! How about giving us another!
DJM 2009