Don’t be put off by the tucked-away location of the bookshop – there are places to park if you know where to find them:

Find Us – Maps and Charts (and where we are!) 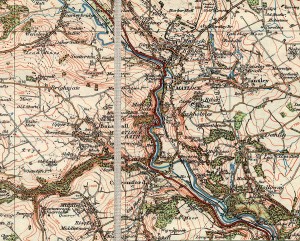 Right is a 1928 British Ordnance Survey map (click on it for a larger image). The strip running down it is the fabric the paper was mounted on (in small panels) to make it hard wearing and easy to fold. If you look carefully, you can see the millpond; which the shop looks out over in the centre of the village, to the right of ‘Scarthin Nick’ and above and slightly to the right of the ‘d’ in ‘Cromford’ (lower middle). Incidentally, Scarthin Nick is a double formation, meaning Nick Nick. The Nick is now often assumed to be the cutting through the rock that lets the Derby Road through to Matlock Bath, but in fact it is the old name for the street called Scarthin and the houses on the hillside along and above it. Maybe the Nick was just a short cut to the old Bonsal Road via Ball Eye, maybe it referred to an old gap through the rocks that gave a rough access to the Matlock Gorge, and maybe it referred to the narrows between Scarthin Rock and Allen’s Hill through which the old road down Cromford Hill goes in order to reach the Ford at the Bend, or the Bent Ford, namely Cromford.

Geographically not much has changed in the last 70 years although, sadly, children can no longer happily play on the main road through the village. Over to the right and up a bit is Dethick; setting for Alison Uttley’s A Traveller in Time and the Via Gellia; the wooded valley to the left of Scarthin Nick was home to D.H. Lawrence during the First World War.

Is rather a bone of contention. You can often park in Scarthin itself, but this cannot be relied upon, especially at weekends and during holidays. The next best option, after dropping off over 80s (no offence meant to the hale) and accompanied under 8s, is to carry on anticlockwise and park on the right-hand-side of Water Lane. Because of such parking, it’s important to look both ways when emerging into Water Lane, but the parking has the excellent effect of impeding and therefore slowing two-way traffic. You may already have tried the Market Place, though parts of this public space have been cravenly handed over to private (or even private public) interests and remain under-used but guarded by threats for much of the day. You’re alright anywhere in front of or opposite the Greyhound. If all is congested, or you are combining us with other activities, then there is some parking just up Cromford Hill and more or less unlimited parking around Cromford Mill and Cromford Canal Wharf, not to mention the vast use made of Cromford Meadows. The walk back to Scarthin (click on one of the maps on this page to clarify) is not far, and can be very enjoyable via the Derwent River Bank, or more constrained but easier on the feet and legs by Mill Road, but the crossing of the busy A6 by the lights is both unpleasant and slow. There are pedestrian phases, but these are fixed by the traffic flow and the buttons you press are a sham. It’s worth it when you emerge onto the space and peace of this special place, SCARTHIN.

Another way of reaching Cromford and Scarthin Books is by the NOTTINGHAM-Derby-Matlock-Bakewell-Buxton-Stockport-MANCHESTER Transpeak TP 1 Coach Service. Click on it for the timetable. This drops you off or picks you up on the A6 Derby Road, one side or other of the main traffic-lighted crossroads. This service is a real boon, connecting us, hourly for much of the day, to three of the neighbouring metropoles. Public transport over the moors to/from Sheffield or Stoke requires more cunning, unless you actually live at Meadowhall Shopping Centre.

About three-quarters of a mile from the bookshop is one of Cromford’s other miracles, the Cromford Railway Station, connecting us to the Really Wide World and from which which I have been achingly seeing my children off to such destinations as Mongolia, Belgium, China and Cardiff for several decades. The station would make a wonderful film-set for such as The Railway Children, Dickens’ The Signalman or even, with its gothic Stationmaster’s House, Psycho. The Matlock-Derby Rail service now runs through to Nottingham as well as connecting haphazardly with London trains. I’ve done my best to link with a TIMETABLE via the annoyingly over-perfect on-line booking pages. As for planes into the East Midlands Airport, well…..

Scarthin Books stock the entire range of British Ordnance Survey Maps at 1 to 25,000 and 1 to 50,000. If you are a walker or climber we recommend the normal or laminated Outdoor Leisure series (No.24 is the White Peak Outdoor Leisure Map). We also stock walking/touring-scale maps of Ireland and France and parts of Spain, Italy and other European countries and Mediterranean islands as well as many types of road atlas and specialist maps for the cyclist along with maps that cover the more distant and fabled bits of the Earth – street maps of Ulan Bator have been requested. We also have a constantly-changing stock of second hand folded maps.

If you are looking at a map of Britain we are about 125 miles north(ish), via the M1, from London, bang in the middle of England; the occasional choice of day-trips to the sea depends entirely on weather, whim and tide-tables; east- or west-wetnesses are equidistant. The nearest large towns are Derby (16 miles) and Chesterfield (12 miles) with the cities of Sheffield (23 miles) and Nottingham (25 miles) nearby, Stockport, Stoke and Manchester not much further off. We are at the bottom end of the Pennine Chain, the high backbone of England, and just two miles outside the Peak District National Park. We survive because we are easily reachable (and well worth reaching) from the many towns of Derbyshire and Nottinghamshire and from further afield via Rail, Road and Motorway. Cromford is a traffic hub, surrounded immediately by high and wild rocks, woods and pastures.The Promenade, Scarthin, Cromford, Derbyshire, England DE4 3QF