[This page is unfinished, check back soon]

‘Scarthin Books is falling down!’

In March 2015 we launched a crowd funding campaign to help us raise funds to cover the costs of much needed structural work on the bookshop. We were hoping to raise a modest contribution of £2500 towards these costs. One month later and with overwhelming support of both loyal customers and fans of the shop from far and wide, we raised a staggering total of almost £12,000. This is a summary of how events unfolded, with photos of the rebuilding process, the additional improvements we were able to make to the shop and how we rewarded those who contributed (the names on the support columns will be ready soon, I promise!).

Due to the success of the online campaign, I’ve been contacted by many other businesses and individuals asking for advice and guidance on their own campaigns. At the end of this piece I’ll do my best to offer some pointers that may prove useful should you be thinking of reaching out for help with your own projects using a similar method. 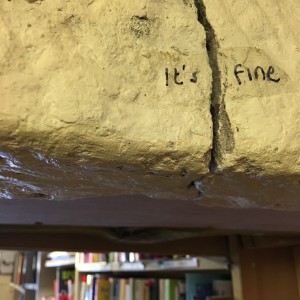 How Our Appeal Came About

For MANY years bookshop staff have been asked by visitors, “how on earth does the shop not collapse under the weight of so many books?“and for MANY years we’ve laughed and replied along the lines of “it’s the books that are holding us up!“. Then we began to realise that we really should get this checked out. So, in March 2015, we invited a structural engineer to assess the premises and, sure enough, discovered that the temporary Acrow props that had been installed on the ground floor during the early days of the shop – although having performed admirably and above and beyond the call of duty – were woefully inadequate and need replacing with specially made steel columns as a matter of URGENCY. It was a good job we checked.

The next job was to employ the services of two local builders (Dave and Rick) and a company to produce the bespoke steel columns and work out a plan of what structural work needed to be done; the removal of the old Acrow props, taking up of the ground floor floorboards, underpinning (setting concrete below the boards to support the new columns), installation of the new supports, and replacing the downstairs carpets PLUS a plan for emptying much of the ground floor of new books and relocating the front desk, till and computer to the Art Room on the first floor, with customer access via the side of the building, so as to keep open (and limit the impact on sales) during the proceedings.

That was the easy part compared to the next hurdle; how to finance it. Independent bookshops aren’t made of money. Scarthin Books, although fortunate enough to still be making a living, so to speak, like all physical book-sellers the world over, are still having to ‘manage the decline’ from the heady days before supermarket bulk-buying of best-sellers, Amazon and e-books until we find our plateau and our niche, to be able to continue thriving and doing what we do best but by adapting to changing circumstances. 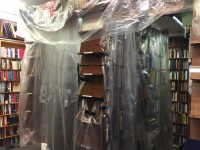 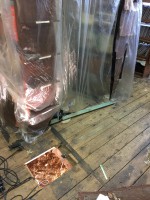 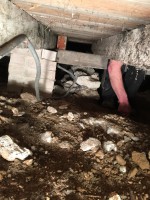 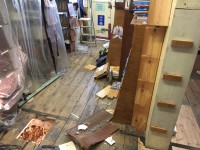 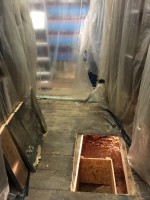 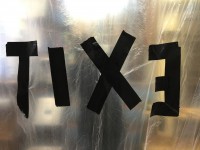 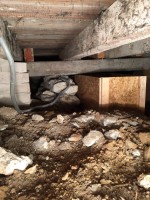 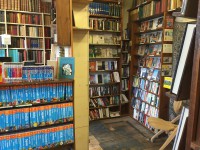 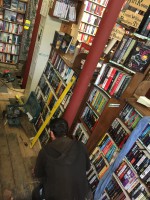 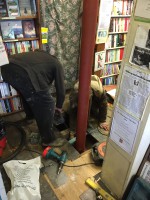 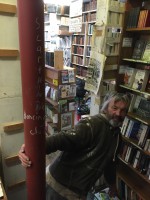 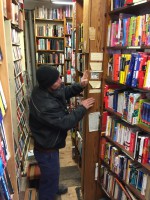 Our Temporary Front Desk in the Art Room

The New Carpets (courtesy of a James Patterson Grant) Go Down 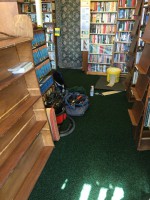 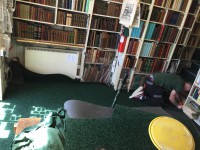 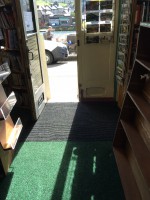 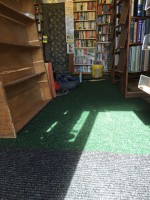