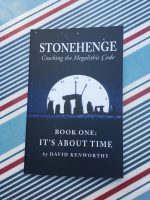 David Kenworthy is a retired auditor from Derbyshire. On retirement he read the work of Professor Alexander Thom who discovered the megalithic yard of 2.72 feet. Fascinated by the controversy surrounding this disputed ancient unit of length he decided to apply modern auditing techniques to try to either prove or disprove the unit. His work and enquiries have developed over two years and are based on Thom’s findings at Avebury and the system he rediscovered incorporating base 10. Thom implied that this system was universally sacred. David has come down very firmly on the side of the professor and has actually identified the megalithic measuring system to be a sub-system of the imperial measuring system. This system works with a second sub-system based on the ancient unit the chain of 22 yards, again incorporating base 10 and facilitating eclipse prediction.

Book One: It’s About Time

Stonehenge is an enigma. Its secrets continue to elude modern archaeologists. However, only forty years ago the designs were almost uncovered. Scientists with impeccable credentials wrote best-selling books and made TV documentaries revealing astonishing theories. It was an astronomical observatory. It was built by prehistoric Einsteins who understood Pythagorean triangles incorporating these into the design using a constant unit of measurement. They were highly organised surveyors, engineers, scientists and theologians. Scientists at the time produced compelling evidence to support these findings. Now they are virtually unknown. This book investigates further with very surprising results. The elusive code is now almost cracked.