Blown up by a hand grenade in Addis Ababa, getting caught in cross-fire in South Sudan, named as a spy by the Government of Ethiopia and thrown out of the country, but later being invited back as an honoured guest. These events are not typical of a country-born lad from North East Derbyshire. He served in the Derbyshire Constabulary, retiring as Head of Training in 1992, after thirty years.Post retirement from the police he worked in the private security industry before being selected to join two retired police colleagues working at the Ethiopian Police College, following the collapse of the communist regime there. His book British Bobby on International Beat follows John on his journeys in Ethiopia, Jamaica, Nigeria and South Sudan interspersed with stories of significant events in his UK police career and his life. 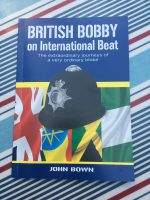 Follows John’s early years, brought up on a small farm in the Derbyshire Hills, when his father died leaving his mother with two young sons to bring up on a low income, but where motherly love, food on the table and a warm bed to sleep in, more than compensated for the lack of money to spend.
​

Read about the origins of the poor relationship between David Bookbinder (then leader of the opposition on the Derbyshire County Council) and the late Alf Parish (then acting Chief Constable) and about some of the problems encountered in policing the City of Derby, when Asian Hackney Carriage drivers (taxis) laid siege to Full Street police station, and the author decided to refuse to carry out an order from the then Chief Constable. You are given an insight into the policing of Derby County at The Baseball Ground when the Rams were riding high in the old First Division and when an evening match against Liverpool presented a significant challenge. Enjoy reading about journeys in Ethiopia, Jamaica and Nigeria and learn about UK policing influence overseas. Find out how some of your overseas aid budget is spent and learn what life is like for some people in the developing world. Learn about the problems of addressing institutionalised corruption in a country which is consistently rated as one of the most corrupt in the world.