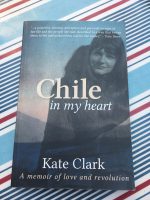 Kate Clark has taught at the Universities of Westminster and Greenwich and has also worked as a translator and interpreter.  Since the eighties she has been a journalist, working for the Morning Star, the Scotsman, BBC television and World Service and various other outlets.

‘Chile in My Heart’ is Kate Clark’s personal story of her love affair with Chile and its people. Living and working as a lecturer in English and Phonetics at the University of Chile in a provincial city, Chillan, it is her story of those turbulent years of the Popular Unity Government, elected in September 1970 and brought down by a savage coup d’etat in September 1973.

“…a powerful, moving, perceptive and personal account of her life and the people she met, described in a way that brings them to life and makes them real for the reader.” – Tony Benn