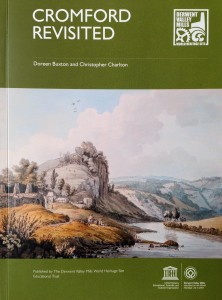 Cromford Revisited – a stunning new book by Doreen Buxton and Christopher Charlton – has just been published and is available later this week from Scarthin Books, priced £18 (post free if ordered online).

This richly illustrated book examines some aspects of the development of Cromford and Scarthin from the mid eighteenth century.  It recognises, as it must, a village largely shaped by several generations of the Arkwright family but introduces a wider cast of local characters; the mill-building George Evans of Bonsall and Cromford; the neighbouring gentry, the Gels of Hopton; the financier Peter Nightingale of Lea and several generations of the Wheatcroft family who spread the name of Cromford nationwide along the country’s network of canals.  Also featured is a later resident, Charles White, the concealed hand behind the Lea Mills strike of 1911-12 and a colourful local politician who was to become West Derbyshire’s Member of Parliament.

In the austere conditions of the 1920s and 30s, with the Arkwright family gone and a squire’s paternalistic hand no longer directing affairs, the village learned to manage for itself.  Then in 1971 when the Arkwright Festival was held to celebrate the bicentenary of Richard Arkwright’s arrival in Cromford, it found itself in the spotlight of heritage celebrity, recognition which in 2001 led to its achieving a central position in the Derwent Valley Mills World Heritage Site.