The History of Scarthin Books

Scarthin’s HISTORY in two parts: The (rather self-deprecating and humble) first thirty two years by David Mitchell, Scarthin’s owner, covering 1974 to 2006, and the (altogether more positive and optimistic) period covering 2007 to the present (and looking ahead to the future) by David Booker, the General Manager.

In 1974 there were few real bookshops outside the larger towns,so starting with one nearly empty room, no capital and no experience we were immediately celebrated and competitive. Living above the shop, freehold, but up an obscure side-street in a down-market village, trade was slow. I installed an extension door-bell in the garden. 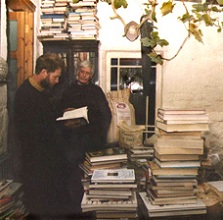 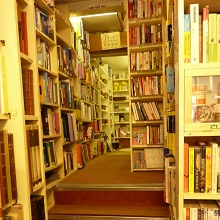 Our big break, a Matlock Training College contract, made the business self-sufficient, and by the time this nursemaid was closed down, Scarthin Books was strong enough to stand alone. If the expansion of the chains makes independents quake nowadays, it was the expansion of the independents that made me paranoid throughout the seventies and early eighties. “I hear you’re opening another branch” was how the latest bombshell would be dropped; soon every town had its enthusiastic new bookseller (little Ledbury had three!). Stuck away in Cromford, reluctant to move from free premises, we felt marginalised. Staying here was to acknowledge defeat at the hands of the High Street, forcing us to differentiate, surviving by fishing behind the net for rare minnows.

From having one room and no employed staff, we now have about (!) twelve rooms open to the public, plus hidden offices,a warehous, reference and packing rooms, and we put in between us about seven full-time equivalents of work. Our turnover is about one thousandth of the Channel Tunnel’s, so we should be able to borrow £9 million from the bank. We can’t, because we make no return on capital, a six figure sum of which has been poured into the bewitching stock-range. In The Lost Girl, D H Lawrence draws an uncomfortably familiar portrait of an ambitious and idealistic draper who wants to introduce the latest metropolitan fashions to a coal-mining town. People gawp at the dazzling window displays but break his heart by ignoring the splendid gowns until they are sold off at a loss. This fate actually befell us at our erstwhile Matlock College branch (I hated academic bookselling – the duping of first year students into buying expensive, bad books they didn’t need), but at Scarthin we have been fortunate. An appreciative clientele come far to visit us: on Saturday October 7th 2006, parties came from Derby, Coventry (with books) and Oxford (with bikes) by train for the day – and in one case for the evening Cafe Philosophique too! Nevertheless, just as the livelihood of D H Lawrence’s draper was saved by the unrecognised services of a spinster sewing pit vests in a back room, I do suspect that to survive, we too must have an unrecognised pit vest trade, but, if we have, it has certainly never been in bestsellers. Maybe it’s for the £4-or-under secondhand books that make up a large part of the stock, undercutting the Net, of course.

Well, capital sunk resembles that in one of the last (ever?) wave of Waterstones or the absorbed Ottakars – that’s how much faster we have to run than in 1974. Our wage rates, holiday pay, sick pay and modest pension contributions for key staff compete with the trade norm. We compare with High Street shops in sales per square foot and per staff hour, but our stock turn, at 1.5 or less, might be considered ludicrous. Compared to a 25,000 title in 2500 sq ft chain store, we stock about thrice the titles in half the space. Only the cafe cannot be divided into three-foot wide canyons! 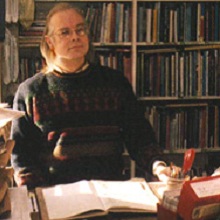 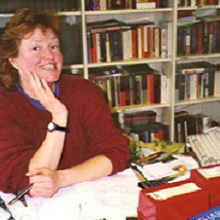 So, here’s what makes us unique:

STAFF: Committed staff, who in the seventies tended to be doing it for fun and pin-money now look to the business for vital family income. Mostly mind-and-body enthusiasts, they now outnumber me, a ’50s square nerd, and the shelves are a dynamic field for our warring interests. ORGANIC GROWTH: This is a hardwood business, visibly the result of evolution and still changing rapidly. As customers say, “Every time I come you seem to have opened another room. Alas, we can’t now*, but we buy several stallsworth of books a week.” (*but we did. Two new rooms, in fact. One in 2011, one in 2014. DB)

INCOMPETENCE: Chaotic shelves, peeling paintwork, inadequate stock knowledge, no events programme, no source in South Africa, no subject catalogues yet, lights and carpet need replacing. We need a bigger tea garden (only two tables so far). If we thrive while so wet-behind-the-ears, think how well we can do when we grow up. HOMELINESS: Like Capability Brown, we cultivate and cherish the unique qualities of our site. Sometimes I think we provide mainly a sense of wellbeing, just happening to meet our overheads by selling books.

AGE: Once we were all about thirty, now we’re mostly 50+ fighting off early-retirement-envy and cancer. Recruiting friends of friends as we do, this is hard to break out of. Having young children helps, and in any case ours is surely the wealthiest and most literate generation there will ever be; books are our thing and we shall all fade gently away together. Postscript: things are looking up, and we are (illegally, since September 2006) encouraging youthism!

ECOLOGY: We are very ungreen: all our customers drive here; the village stinks of exhaust fumes (not just from our customers!). Valuable books now go all over the World via the internet, but it is uneconomic to process inexpensive books except in inhuman surroundings.

DISCOUNTING: We are in a phoney war period; big ring-road booksheds selling everything 20% off could lead to the marginalising of all traditional bookshops. Everywhere, specialist ironmongers, seedsmen and chemists are going the way of hat shops. The waters are rising. Quick, build a tower – amd offer 10% off expensive books, as we now do.

GENERALISM: The first question is always, “Do you specialise in anything?” The answer “everything” doesn’t convince. I imagine that many reading this will be Number One in some fascinating specialist niche. We’ve utterly failed to do that, though we do enjoy leading the chasing group in your own and many other fields.

Finally, insults. Never sneer at us sheltered in our pretty out-of-town location: it’s hard work surviving as a rare alpine. Never, never say “I suppose you rely a lot on special orders.” We have a Lonely Planet Guide to Slovenia in stock! 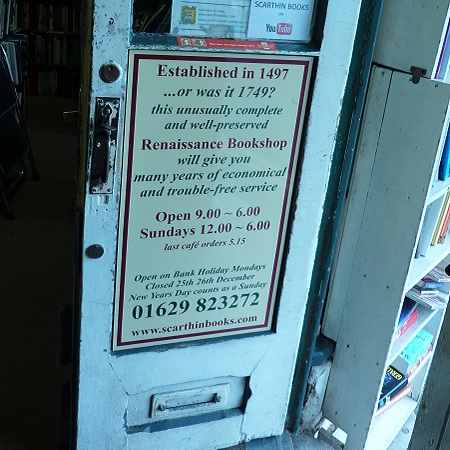 ‘Ageing staff’ and ‘inadequate stock knowledge’ my arse. A lot has changed since this part was written and the organisation and layout of the shop and its many sections has improved immensely. Read on…  David Booker, General Manager (August 2015).

The story will be updated soon…and it’s a LOT more positive than the tone has suggested so far!