A message to the Scarthin Books community that Pat died on Tuesday morning (4th June) in Torrevieja Hospital, near her home in Playa Flamenca on the Costa Blanca in Spain. 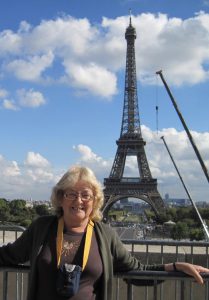 Pat Mitchell, nee Maidment, was brought up by adoptive parents in the Hodge Hill area of Birmingham where she worked as a secretary for the City Council. I met her after she joined the Birmingham National Trust Conservation Youth Group, “The Young Oaks”, which I led from 1968 to 1972. We married in Matlock Bath Holy Trinity Church in January 1974 and soon began work on founding Scarthin Books, which, after several months of DIY shop-fitting and stock accumulation, opened to the public on Saturday 24th. August, 1974, then comprising only the main ground-floor shop premises.

For two years Pat staffed Scarthin single-handed (except on Saturdays), soon alternating with Matlock College Bookshop, while I continued to work for the then West Derbyshire District Council planning department, before resigning in 1976 when, to our surprise, the bookshop offered a basic living. We separated in 1978, but remained on good terms. Pat purchased a cottage, 74, Cromford Hill, where she lived until moving to Spain.

After leaving both me and Scarthin Books Pat worked for Derbyshire County Surveyor’s department for many years before gradually re-joining the bookshop team, first as book-keeper but eventually becoming fully involved. It was gratifying to have her back helping in the business she co-founded. During this period Pat managed to find a place for her mother in an OAP flat in Cromford, and supported her there until she reached her century and moved into Lilybank carehome, Matlock.

After her mother’s death, Pat first rented, then bought an apartment in Playa Flamenca, not far from Alicante on the Spanish Coast. Pat liked to be warm and had no regrets about leaving our chilly clime. She remained in regular contact by telephone and would spend a week in Cromford every year or two, sometimes staying with Kathy and myself at Hillside View, visiting old friends, and going for walks with Julie Barton among others.

Pat was very content in Spain, though she did not learn to be fluent in Spanish, living in an-expatriate community with many English friends and others from countries including Germany and Holland, whose lingua Franca was English. She had a very good male friend with whom she would go for walks and drives, and his death a couple of years ago was a big blow to her. Otherwise her social life revolved around the modern development surrounding a little outdoor pool where she lived, around language groups and quiz teams (the Fisherman Quiz Team) but particularly around the charity shop where she was in charge of the book section – nothing that Scarthin would want, she told me, mainly much-circulated easy-read paperbacks.

Visitors from England would stay for a few days, including my daughter Ruth on one occasion. Pat also joined organised group holidays from time to time, one being a very adventurous and eventful overland expedition across tropical Africa, making several new friends on these journeys. Latterly she was being more cautious, sticking to European coach holidays. Pat was also much employed looking after a number of neighbourhood cats for whose food and comfort she became responsible.

After several years reaching dead-ends, Pat had finally manged to trace her birth parentage, finding she had half-siblings whom she contacted and who made her welcome. They had suspected her existence, from “things said or not said”. Feeling part of this additional family gave Pat much pleasure. Pat did have health problems from time to time but had always bounced back. Her eventually fatal illness began some months ago when she found she could not eat without nausea. A stomach infection was diagnosed and pronounced cured by antibiotics, but she felt no better. Months of tests ensued, all with negative outcomes but meanwhile Pat was not eating, was losing weight and becoming weaker. A German and three English couples were among those keeping an eye on her and twice taking her into the modern hospital at Torrevieja nearby, where she spent much time sleeping, too weak even to sit up without aid. Medical staff would not, in this world of the human right to privacy, tell Pat’s friends or myself anything at all about her condition but we had hoped that with intravenous and slowly restored normal feeding she would regain strength and the ability to hold down food and soon regain her health, but it was not to be. I am so glad that I finally managed to get through and speak to Pat on Sunday and tell her she was “family” to me, even if not legally. Friends were visiting her at the time and I’m told that our conversation cheered her up.

So, farewell Pat, from all at the bookshop who knew her. We all benefited from your loyalty to Scarthin Books, from its very beginning right up to the present and are glad that you had many happy and fulfilling years, though cut short, in the warmth of Spain.