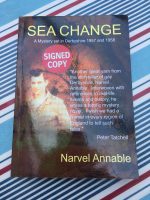 Sea Change is a controversial story of transformation: a journey from despair to delight. Adolescence is the change from boy to man. In a sequel to Lost Lad, Simeon Hogg escapes from a living hell into an enchanted world of fairytale people inhabiting the nooks and crannies of deepest Derbyshire. Follow him as he transforms from a rough and miserable urchin who – ‘suffers a sea-change into something rich and strange’ – as sung by Ariel, the airy spirit from The Tempest.

With the help of legislation and enlightened education, the LGBT community of the 21st century hopes these horrors, which have damaged so many, have gone forever.

This novel explodes myths and challenges conventional thinking. Whilst not condoning, it does not condemn. At the brink of self destruction, Simeon’s sexual abuser becomes his saviour, persuading him, giving him courage to escape and live – rather than to stay and die in a culture where a boy was esteemed by his ability to inflict humiliation, pain and suffering on others.

Another great yarn from the storyteller of gay Derbyshire, Narvel Annable. Interwoven with references to real-life events and history, he writes a terrific mystery novel. I wish we had a Narvel in every region of England to tell such tales.